Goats are being genetically engineered to become “pharm animals” that carry vaccines in their milk.

Current experiments being conducted by researchers from Texas A&M are geared toward producing an “edible” malaria vaccine, with the ultimate goal being that children drinking the milk will become vaccinated in the process.

While claiming that bioengineered animals could be “life-savers” for people in third-world countries, the researchers ignore the glaring issue that such biotechnology often produces unknown, and unintended, health consequences that prove tragic for individuals and the environment.

Vaccines in Your Milk?

Transmogrifying farm animals into “pharm” animals to act as living and breathing pharmaceutical factories is not new.

In 2009, the U.S. Food and Drug Administration (FDA) approved the first drug produced by livestock that had been bioengineered to express a human gene.

In that case, the protein was extracted from the milk of genetically engineered (GE) goats.

In the latest instance, researchers introduced DNA coding for the malaria parasite into the goat genome linked to milk production.

The DNA is supposed to “switch on” only in the mammary gland when the goat produces milk.

As we’ve seen in the past with genetically modified plants, genetically engineered vaccine-producing animals might enter the food supply unexpectedly — exposing unintended recipients to the vaccine. Or the animals might escape and breed with others, passing these bioengineered genes on with unpredictable consequences. Even the technology itself is risky at best, because when animals are exposed to foreign DNA, literally anything can happen.

Take, for instance, milk from cows treated with a synthetic, genetically engineered growth hormone called rBGH. rBGH milk differs from natural milk nutritionally, pharmacologically, immunologically, and hormonally, and along with causing health problems in the cows, it is linked to cancer in humans. What does ingesting the DNA from the malaria parasite in your milk cause? No one knows.

Malaria is caused by a parasite of the species Plasmodium, which is spread from person to person by infected mosquitoes. Every year, it results in about 1 million deaths, the majority of which are in third-world countries. We are certainly in need of a solution, and while it sounds good in theory that a child could be protected from malaria just by drinking a glass of milk, remember that vaccines often weaken and confuse children’s immune systems, which ultimately increases their susceptibility to the very infectious diseases vaccines are designed to prevent.

The most vulnerable of the world’s children are those in the poorest countries where death and disease is often a result of malnutrition, and where children are often battling some sort of infection 200 days out of the year. Vaccines can be devastating to these already immunosuppressed children, as well as to adults.

However, emerging vaccine markets like third-world countries will soon outgrow developed markets by hundreds of billions of dollars. Emerging markets are areas of the world that are beginning to show promise as a profitable venture for many products, including vaccines. And emerging markets â€“ primarily in developing countries in Southeast and Central Asia, and Africa â€“ have been on vaccine makers’ radar for quite some time.

Giving Immune-Compromised Children Vaccines May Create Illness, Not Cure It

One reason that vaccine makers are interested in these parts of the world is that that’s where most of the world’s deaths from major infectious diseases occur. The only problem has been that, until recently, making vaccines for undeveloped countries with no money to pay for them, was not exactly a profitable goal for vaccine makers.

Concerned that developed countries would have little or no resources for addressing serious infectious diseases if vaccine makers continued their pull-out, the World Health Organization and the G8 â€“ the top developed countries in the world â€“ responded with a plan for inducing vaccine companies to stay in the business.

That plan was called Advance Market Commitments (AMCs). Under AMCs, developed countries make legal, binding agreements to purchase vaccines that are needed in low-income countries. The purchase guarantees a bottom line for the manufacturers. In return, the manufacturers promise to sell those vaccines at reduced prices in the countries where they are most needed.

Unfortunately, legally binding, advance market commitments to purchase vaccines that are mostly needed in third world countries could backfire on developed countries that don’t need â€“ or want â€“ certain vaccines. Malaria is one of the top neglected diseases that world health leaders want to address with AMCs, so the GM vaccine-producing goat milk might already be on their radar.

The ability to resist diseases like malaria requires a strong immune system, and for that, you require good nutrition, clean drinking water, and sanitation. If we want to help people in other countries to lower their malaria rates, it would be wise to focus on these basics first. In order to eradicate infectious disease from a nation, you have to first address compromised immune systems. If you hit immune suppressed children with a potent, adjuvant-loaded vaccine, you’re far more likely to create new disease, not eradicate it.

It’s similar to the corporations seeking to plant genetically modified golden rice in the developing world to purportedly alleviate vitamin A deficiency. What people in the developing world need to receive ample dietary vitamin A are the basics like access to a diverse range of nutritious foods — including animal products like eggs, cheese and meat and vegetables such as dark leafy greens and sweet potatoes. This is the type of diet that is attained from biodiverse farming — the opposite of what will occur if golden rice is planted on a large scale. So in the end it appears the golden rice will do little to improve vitamin A levels in the poor — and may actually make vitamin A deficiency worse.

The vaccine-producing GM goats are a double-edged sword because while no one knows for sure what consuming GM vaccine-containing milk will do to humans, there’s very convincing evidence that genetically modified foods spell nothing but trouble for your health.

In one review of genetically modified organisms (GMO) — an analysis of 19 animal studies — it was revealed that nearly 10 percent of blood, urine, organ and other parameters tested were significantly influenced by GMOs, with the liver and kidneys faring the worst.

In the only human feeding study ever published on genetically modified foods, seven volunteers ate Roundup-ready soybeans. These are soybeans that have herbicide-resistant genes inserted into them in order to survive being sprayed with otherwise deadly doses of Roundup herbicide. In three of the seven volunteers, the gene inserted into the soy transferred into the DNA of their intestinal bacteria, and continued to function long after they stopped eating the GM soy!

So, exposing children in third world countries to these potential risks needs to be carefully considered before a malaria vaccine is distributed in GM milk especially when there are other innovative ways of fighting malaria available. In addition, Jeffrey Smith, founder of the Institute for Responsible Technology, has documented at least 65 serious health risks from GM products of all kinds. Among them:

Why We MUST Insist on Mandatory Labeling of GM Foods

Mandatory labeling may be the only way to stop the proliferation of GM foods in the US because while GM seeds are banned in several European countries, in the U.S., certain states are actually passing legislation that protects the use of GM seeds and allows for unabated expansion! At present, no less than 14 states have passed such legislation. Michigan’s Senate Bill 7771, if passed, would make that 15. The Michigan bill would prevent anti-GMO laws, and would remove “any authority local governments may have to adopt and enforce ordinances that prohibit or regulate the labeling, sale, storage, transportation, distribution, use, or planting of agricultural, vegetable, flower or forest tree seeds.”

While legislation like this sounds like crazy nonsense to most people, such bills are essentially bought and paid for through the millions of dollars Monsanto and other biotech companies spend lobbying the US government each year. In the first quarter of 2011 alone, Monsanto spent $1.4 million on lobbying the federal government — a drop from a year earlier, when they spent $2.5 million during the same quarter.

Their efforts of persuasion are also made infinitely easier by the fact that an ever growing list of former Monsanto employees are now in positions of power within the federal government. 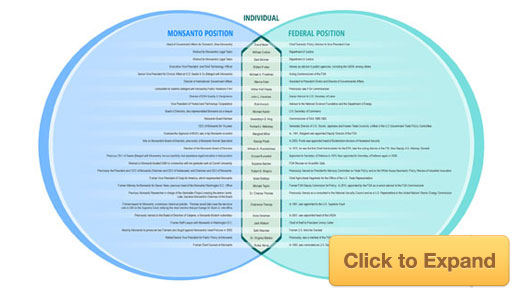 Proof Positive that GMO Labeling WILL Change the Food Industry

Many don’t fully appreciate the strategy of seeking to have genetically engineered foods labeled in California. The belief is that large companies would refuse to have dual labeling; one for California and another for the rest of the country. It would be very expensive and a logistical nightmare. So rather than have two labels, they would simply not carry the product, especially if the new label would be the equivalent of a skull and crossbones. This is why we are so committed to this initiative as victory here will likely eliminate genetically engineered foods from the US.

Powerful confirmation of this belief occurred in early 2012 when both Coca-Cola Company and PepsiCo Inc. chose to alter one of their soda ingredients as a result of California’s labeling requirements for carcinogens2:

“Coca-Cola Co. and PepsiCo Inc. are changing the way they make the caramel coloring used in their sodas as a result of a California law that mandates drinks containing a certain level of carcinogens bear a cancer warning label. The companies said the changes will be expanded nationally to streamline their manufacturing processes. They’ve already been made for drinks sold in California.”

This is a PERFECT example of the national impact a California GMO labeling mandate can, and no doubt WILL, have. While California is the only state requiring the label to state that the product contains the offending ingredient, these companies are switching their formula for the entire US market, rather than have two different labels. According to USA Today:

“A representative for Coca-Cola, Diana Garza Ciarlante, said the company directed its caramel suppliers to modify their manufacturing processes to reduce the levels of the chemical 4-methylimidazole, which can be formed during the cooking process and as a result may be found in trace amounts in many foods. “While we believe that there is no public health risk that justifies any such change, we did ask our caramel suppliers to take this step so that our products would not be subject to the requirement of a scientifically unfounded warning,” Garza-Giarlante said in an email.”

Due to lack of labeling, many Americans are still unfamiliar with what GM foods are. We have a plan to change that, and I urge you to participate and to continue learning more about GM foods and helping your friends and family do the same.

To start, please print out and use the Non-GMO Shopping Guide, created by the Institute for Responsible Technology. Share it with your friends and family, and post it to your social networks. You can also download a free iPhone application, available in the iTunes store. You can find it by searching for ShopNoGMO in the applications.

Your BEST strategy, however, is to simply buy USDA 100% Organic products whenever possible, (as these do not permit GM ingredients) or buy whole fresh produce and meat from local farmers. The majority of the GMO’s you’re exposed to are via processed foods, so by cooking from scratch with whole foods, you can be sure you’re not inadvertently consuming something laced with GM ingredients. When you do purchase processed food, avoid products containing anything related to corn or soy that are not 100 percent organic, as any foods containing these two non-organic ingredients are virtually guaranteed to contain genetically engineered ingredients, as well as toxic herbicide residues.

To learn more about GM foods, I highly recommend the following films and lectures: